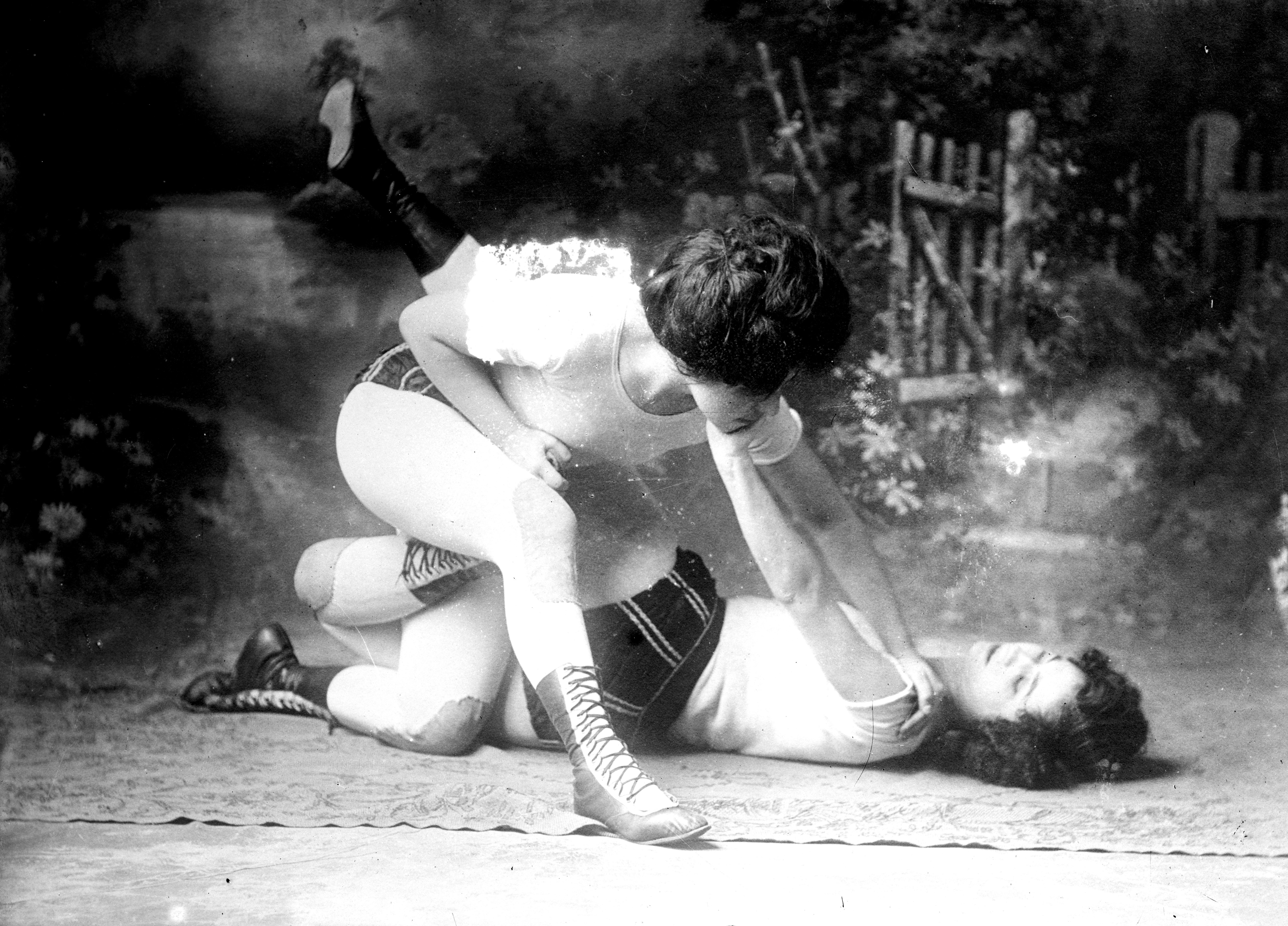 My interest in women’s wrestling can be summed up by this one image. It’s . Those women look fierce — and their photo on Wikimedia Commons is titled “Bennett Sisters catfighting.“

Catfighting! Catfighting is the kind of hair-pulling and verbal sniping that we did in Girl Scouts. Someone saw this photo on the Internet and decided that the best way to describe what they saw was “catfighting.” Nevermind that one of those women may be one of the notable champions of women’s wrestling in the early . It’s an image of two women fighting, so what could they be doing other than “catfighting?”

But let’s back up a bit.

Who Were the Bennet Sisters?

Honestly, I didn’t find much specifically on “The Bennett Sisters,” other than an offhand comment in a book that was not exactly easy to parse. I was able to get that they were a vaudeville act, and in addition to wrestling, they also boxed and fenced. (Could. They. Be. Cooler?)

There were novelty wrestling attractions that became standard vaude acts, like the Bennett Sisters (not the Hollywood Bennetts). In 1908 May Harris, a female wrestler, appeared at Hammerstein’s, and a few years before that a Female International Wrestling Troupe disbanded because of the death of one of the members; eleven went back to Europe. As a showwoman Cora Livingston was the greatest of ’em all. […]

The Bennett Sisters did boxing, fencing, and wrestling […]

Vaudeville From The Honky Tonks To The Palace by Joe Laurie, Jr.

I can’t find definitive names of either woman in this particular photo, only speculation that one of them might be Laura Bennett, who fought Cora Livingston many a time in the early . This site notes Laura Bennett as her “trainer/mentor.”1 From “They made the history: Women in competitive sport of wrestling“2:

Laura Bennett challenged Livingston in 1910 at the Century Theatre, Kansas City MO, for a $1,000 side purse and a belt emblematic of the world’s title. Smaller and outweighed by 50 pounds but professionally trained, Livingston won in straight falls, eight minutes and four minutes, respectively. Since then she has never lost a best two-of-three bout. A report says: “The Livingstone girl tore into the Bennett girl right from the start and pinned her in 12 minutes. Miss Bennett’s morale was shot to pieces by that fall. The second part of the match was no contest. Cora threw Laura in three minutes. When I say ‘threw’ I mean it. A half Nelson and crotch hold proved to be the Livingstone media for victory. Cora was recognized everywhere as the greatest female wrestler in the world.”

Whether or not Laura Bennett is one of the “Bennett Sisters” in the image isn’t definitive — but Laura Bennett certainly existed as a wrestler in the early 1900s, and she wasn’t “catfighting.” Except…

This is one of those weird situations where to my modern eye what they’re wearing is practical from head to toe. Hair pulled back. T-shirts, ads, boots, and leggings. After a decade of wondering, “Why does everyone loose, long hair?”3, it all just looks so put together and professional.

But upon considering it from a different angle, and I can’t help but wonder if these outfits might have been the sequined bikini of their time. In an era where silhouettes were becoming shapeless and maybe 20 years after women’s legs were considering deviously sexual, leggings are awfully revolutionary.

There’s some evidence to back this up: L.A. Jennings writes in their article “Cora Livingston and the Spectacular Sport of Wrestling:” “The Chicago Tribune declared the fight between Cora Livingston and Lou Harris to be “the most disgraceful thing of the kind ever seen in Chicago.” As always, the costume of the women was part of the critique: the women wore tights, showing off their legs to a shocking degree.”4

In the book “Pro Wrestling FAQ: All That’s Left to Know About the World’s Most Entertaining Spectacle,” Brian Solomon writes:

As far back as the prim and proper Victorian Era of the late nineteenth century, women wrestlers could be found appearing in carnivals and circuses–much like the men, only treated as much more of a freakish attraction, challenging as they were to the conservative mores of the day. […] Eventually, women’s wrestling migrated from the carnival sideshows to the burlesque houses and the back rooms of taverns, playing even more directly to the lascivious undertones of the proceedings involved, as throngs of rowdy men in various stages of inebriation cheered on the unseemly action.

This all fascinates me. What immediately jumps out to me as being bad-ass and practical probably looked an awful lot more like this to the wrestling fans and women observing at the time.

I think there’s a complexity to women doing the work they want to do and having to do it on ‘ terms, especially when they’re some of the first break into an industry dominated by men. In her youth, Mae Young would be told to her face, “I don’t like girl wrestlers, women should be in the kitchen, but after seeing you, you born to be a wrestler,” as a compliment.

Women should be in the kitchen. Like, I know that’s such a tired cliche as to utterly toothless at this point, but still.

Wrestling-for-entertainment is historically an industry run by (straight) men that caters largely to (straight) men, where a woman’s ambitions as an athlete and performer fall secondary to how her performance serves and titillates the observers. It doesn’t shock me that women who pursue wrestling as a career often go with the flow when it comes to their sexualization (or that the eventual revolt against women-as-set-decoration came with the Women’s Revolution) — if you don’t go with the flow, what work will there be for you? there had a long career and is well known for her role as a woman in wrestling, sexual as it was.

She also filed a lawsuit for sexual harassment against WWE back in 1999. I almost wouldn’t note it — it is in no way a shocking discovery — except that the short write-up of the suit in that link ends by denoting that she was topless in Playboy, a small piece of information that has very little to do with the lawsuit. It feels almost like an admonishment: “We’ve already seen ’em, there’s nothing to hide.” As though exposing her breasts ought to just be part of her job as a performer and athlete, and no different than posing nude for a photo shoot.

In my half-watched years of wrestling, that’s what’s stuck out to me: if the audience is expected to be paying attention to the women wrestling at all, it’s presented with an assumption of gawking and jeering, rather than appreciation of the ‘ ability or athleticism.

That tide is turning, and I am here for it. But for decades women have been haunted by the idea that their primary job function, both as performers and as wrestlers, is to be sexy — to titillate the audience with their violence, rather than shock them. I’m willing to bet that it reaches back so far as the Bennet Sisters, wrestling in their leggings and boots at burlesque shows in 1910.