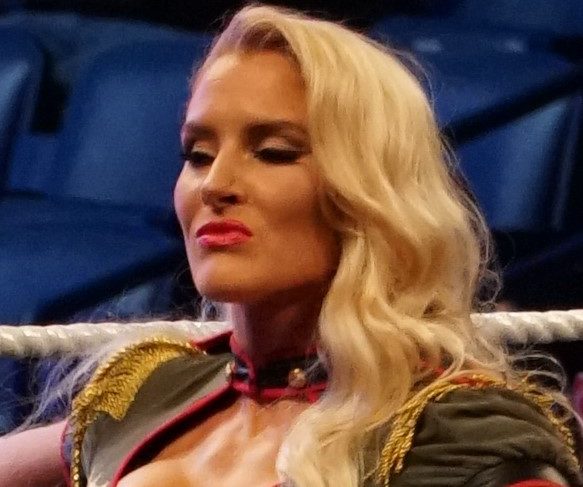 One of the trickier things about parsing WWE storylines and characters is trying to figure out when a character is being presented sincerely and when they’re leaning into a parody. The medium is often goofy, but not exclusively, so you can’t assume it’s always satire. It’s doubly difficult because sometimes sincere characters are written awkwardly and read like parodies. All in all, WWE characters and stories seem to exist on an axis:

Take the New Day. I’d put them pretty firmly in the midst of the axis, leaning a bit more badass and a bit more parody. But they were equally hard to read when they came out doing their “power of positivity” thing. Were they always meant to be a parody? Or did they take an awkward gimmick, doomed to be forgotten, and shift the narrative to make it work? I suspect the latter, but I honestly don’t know. Alternately, there’s Finn Balor, who started out a sincere badass and has been edging ever-closer to goofball in the last year, though I couldn’t tell you if it’s by design or bad writing.

With the current storyline between Becky Lynch and Lacey Evans, I’m equally as perplexed. Becky Lynch is firmly in the sincere badass quadrant, and I suspect she’ll stay there for a long time — it’s working well for her. Meanwhile, Lacey Evans is all up and down that parody axis.

She spent weeks just interrupting matches to model, without saying a word or doing anything. She calls her punch “the Woman’s Right” and breathily offers advice on how to be more ladylike. Is this a joke of what the classic southern belle looks like in a modern setting or a sincere representation of what Lacey Evans and whoever is writing her see as ladylike ideals?

Social media seems to frequently hop the line between the actor and the character, and it’s tricky to make out what’s kayfabe and what isn’t. I had Lacey Evans pinned as sincerely being this character, until listening to her interview on Chasing Glory with Lillian Garcia.

She talks specifically about the aesthetic and choosing it because she wanted to look “like a lady” while also being wholly able to kick your ass.2 She even makes brief mention to having similar issues with Becky Lynch’s “The Man” nickname that I do. But she also makes it clear that she’s “old-fashioned” and that she wants her daughter to see that women can be beautiful and tough. The overall gist feels like the current Lacey Evans character is the actor turned up to 11.

Thing is, the character has some quirks that give me pause, and the storyline has significant flaws that are especially ugly in contrast to this whole “Women are finally having their moment” plot that’s going on.

They’re going for exactly what Lacey Evans herself has said: she’s a classic beauty3 who will kick the ass of all takers. But they’re aiming at the contrast of Evans being “a lady” and Lynch being “the Man.” The dichotomy itself is an issue: it’s setting up a story wherein women compete over which one of them is being the right sort of women’s wrestler.

This awkward storytelling is just getting worse as their story culminates. Take RAW this past Monday.4

You have Becky Lynch all-but-saying that Lacey Evans is only on television because she’s sleeping around with management. Lacey Evans comes out and talks about how unladylike Becky Lynch is, how she’s “a typical man.” The only woman on commentary hates Lacey Evans, while the men fawn over her.

The gender essentialism at the forefront of Lacey Evans’ promos and social media is off-putting — I’m legitimately hoping it’s more act than genuine. It’s an antiquated vibe that feels utterly regressive when brought up against Becky Lynch. Her character gives off the aura of that non-threatening feminist that old white men love, whereas Becky Lynch is aggressively threatening.

But is that reason enough for Evans to be the bad guy here? Is she, in fact, the bad guy here — is it a “good guy” move to say your opponent makes ample use of the casting couch? And why on earth is the first big post-Mania story in women’s wrestling one where we encourage the audience to boo and hiss at a woman who leans into traditional expressions of femininity?

It’s not as though it’s a story that can’t be told. In fact, I think these two as opposites in this story have a lot of potential to reflect a real, actual human issue for women watching. Women are frequently trying to walk the tightrope of what it means to be the sort of woman they want to be. What does it mean to fit into certain traditional feminine boxes and not others? What does the rejection of those boxes look like? How do we interact, as people, when we’re walking the same path but in very different shoes?

This is not where I foresee this story going. Bluntly, it’s a more complex story than WWE tends to tackle for their wrestlers of either gender. It would be unreasonable to expect nuanced storytelling from a product that does not regularly deliver that kind of quality. Furthermore, the only notable woman listed as part of WWE’s creative team is Dana Warrior, and she reportedly started earlier this year. There are undoubtedly other women involved in the creative team who don’t make that list, including the various performers themselves, but the ratio of men and women leading the stories is going to impact the kinds of stories told, both for men and women.

It’s the same fear I had before WrestleMania: are women’s stories going to stagnate now that they’ve “made history?” Do the writers figure they’ve done the great big story, so they can rest on the laurels of a job well done?

I expect we’ll see a continuation of the same nonsense with no actual reflection or self-awareness. It feels like WWE has been sliding back into the comfortable, tired stories of women fighting about being women, as though there’s nothing else they could feud about. My fear is that audience interest will wane and we’ll start to hear about how the audience doesn’t care about women’s wrestling, even though the creative team sent them out to run that race on broken feet.